Excerpted from Finding Your Force, Chapter 13

It was freezing that December 31st it was my last day EVER walking into that building. I would never have to walk back into KB’s office. I would never see those people again. After everything that I had been through the head of HR was still so supportive of me. She paid me for three months after the breakdown. One of the terms of my termination was that I would float from department to department just to keep my benefits. I would then receive a small severance package. She let me keep my laptop and cell phone. She made it possible for me to have the kind of termination where I could collect unemployment. I was so incredibly grateful for that. At 2:00PM I put on my coat, my hat and gloves, grabbed my purse and walked out of the revolving door and never looked back. 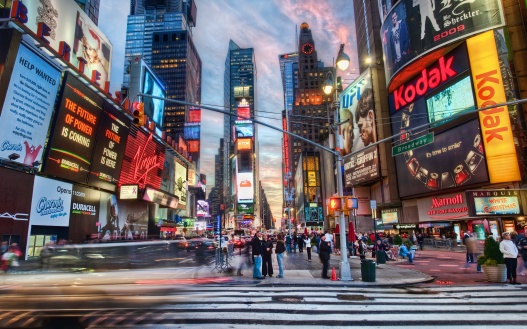 The moment I stepped onto the streets of Times Square it was as if I could breathe for the first time. I took a deep breathe and allowed the cold breeze to fill my lungs and in that moment it was as if two tons were lifted from my shoulders and I was floating. I just smiled. That chapter was finally closed.

This was gonna be our year girl!!! Big things were gonna happen!!! We finally got the call that our number came up. We were on a waiting list for three years for the apartment in Harlem. The building we were moving into was just remodeled. We would be the first people living in our space. Things were changing. I decided that this time we would make our apartment HOME. I had never really cared to decorate our apartments before now because they always felt so temporary. None of the apartments we lived in felt like they fit. I didn’t buy stuff to make it too comfortable because I always felt uncomfortable. Warwick, Providence, North Providence, Pawtucket, Davie, Plantation, Tamarac, Sunrise, Astoria, Far Rockaway, Ridgewood, Tia’s house, Tio’s house, abuela’s house, grandma’s house… GIRL WE MOVED THIRTEEN TIMES. You are a trooper!!! I have moved you everywhere. How do you do it? How is it that you are this amazing? You put up with so much shit. Thirteenth time is a charm and we finally got it right.

THIS TIME… we were NOT MOVING!!! I was so excited that we got this apartment. The management office had NO IDEA I was unemployed. And I certainly wasn’t telling them. I had to come up with a few thousand for us to move in. We bought paint for the first time. I didn’t want us to move into the space until it was exactly what we wanted. I wanted it to be perfect for us. I remember charting out exactly how I wanted the house to look. I drew a sketch of the entire apartment. The living room was painted red and orange, purposely so that we would feel warm like we were in the Dominican Republic. The color for entry hallway we decided on was special to us because it was called “brilliant” and reminded us of KB. KB always said, “That’s brilliant!” our beautiful brilliant yellow hall and your room was lavender. Back then you were so girly and gentle. I rented a truck and hired movers. It was moving day! This was the perfect month to move you would be turning thirteen.
We were finally home!

It was time for me to return the truck to the rental place in Queens. You and I were driving onto the bridge. There was a check point at the toll booth. Since 9/11 NYPD presence was everywhere. They pulled us over to check the truck. The police officer asked me for my driver’s license, registration and the rental agreement. He came back to the truck and said, “Ma’am do you know your license is suspended?” I played stupid. Of course I knew it was suspended. Where was I going to have the time and money to reinstate my license? How was I going to pay that $300 speeding ticket that I got in Atlanta so many years ago? I considered falling apart right in front of him and telling about everything I’d been through from leaving Florida to the breakdown in New York City.

“No officer, I had no idea my license was suspended?”

“You realize I can have the truck towed and arrest you for driving with a suspended license?”

My eyes started to swell up. All I could think about was how you, my little girl, was going to have to watch me be arrested.

We were parked on the Triboro Bridge for a long while and you were just looking out window smiling. You were staring at the women’s prison on the right and a baseball field and bridge on the left and I’m sure you were thinking to yourself, we’re gonna be fine.

Mommy gets us out of worse messes. He has no idea! You looked at me and said, “Don’t cry mommy… it’s gonna be fine. It’s like that movie I was watching… we’re on an adventure!”

I started laughing hysterically because you had no idea how serious this shit really was. My ass could be thrown in jail. The cop was kind. He had me pull the car over and we called your tio to meet us on the bridge and drive the truck back. He let us

off—thank God. After that scare we were back in the game. We were good. I dropped you off at school everyday. Our commute was amazing just one train and a twenty minute commute. I went to Starbucks to write every morning and then would go to central park in the afternoon to read. We lived well. I felt light. We were living a bohemian lifestyle. We finally had that phat apartment in Harlem. And I was FINALLY FREE!
Peace, light and LOVE~
Alicia